About the Worldwide Wheelwright Project

Worldwide Wheelwright’s aim is to study the skills and practices of American Wheelwright’s both current and past in the hope of finding alternative resources and methods for the future of Wheelwrighting in the UK.

The knowledge learned from this journey and others since has been put to good use and has helped implement changes/advances in my own practices as well as helping in the teaching of my apprentice. Links made during my research have enabled UK wheelwright’s to visit Colonial Williamsburg and study there with thanks to the Generosity of the CW Wheelwright’s shop and the Worshipful Company of Wheelwrights.

My name is Phill Gregson, I am a fourth generation Master Wheelwright based in Lancashire, England. Having grown up with Wheelwrighting as the hub of the family business I decided to set up on my own and attend a course at Herefordshire College of Technology to achieve a qualification in the trade.

Over the years as a Wheelwright I have been lucky enough to be invited to events like the Queens Jubilee Luncheon and had access to some fantastic places and collections.

I have been accepted as a Yeoman of the Worshipful Company of Wheelwrights and awarded a City and Guilds Master Wheelwright certificate, two of the very proudest moments in my career, closely followed by receiving the fellowship grant from the Winston Churchill memorial trust to perform this research.

I have worked on television and radio for multiple companies including several BBC regional radio stations, BBC Countryfile, appearing on Escape series one episode one for Channel 4, building and driving the BBC Breakfast Women’s Suffrage caravan with my horses Arnie and Bear.

As a Wheelwright I encounter a different job every day, and it is very rare to get two jobs the same. The day to day work varies and offers constant mental stimulation (and regularly distress)!

My Grandfather often says I’ve been working sixty odd years or more and I still don’t know it all’! I find this a great incentive to be a wheelwright as I will never be bored by monotony. 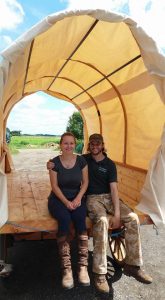 Wheelwrighting is a tradition that has passed down many generations in my family. Originating in Kent and moving to the north-west after World War One.

My great-grandfather was sent to Southport Hospital after cutting his finger off in a french saw-mill whilst waiting to be De-mobbed.

Here, he met my great-grandmother and went on to work for the Scarisbrick Estate, which was one of the largest estates in the north-west. He had two children, Edward and James.

Edward is my grandfather and after leaving school at 14 years of age, during World War Two, he became a cabinet maker in Southport. Edward eventually went on to follow in his father’s footsteps and work on the Scarisbrick Estate as a foreman. His job consisted of farm and property maintenance and wheelwrighting.

My Grandfather had three children, Albert, Alan and my mother, Susan. My Mother trained as a wheelwright with my Grandfather, but stopped to become a full-time mother when I was born. It was then up to my father, Paul, to carry on the family tradition, which he continued until I was in my late teens.

As a child being in the workshop always interested me and it wasn’t long before I was helping out and learning the trade for myself.

After leaving school, I worked for a company which restores metalwork in parks and recreates Victorian furniture. It was there that I built up my knowledge of blacksmithing and metalwork.

I went on to a few different jobs including working in a nightclub, here I realised that being a wheelwright was the right job for me. 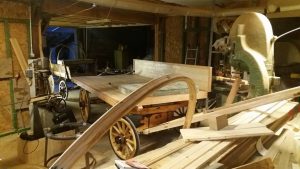 Horsedrawn dray in the workshop